After a few months back in Seattle, much of it spent pet sitting for several great pet owners and their adorable pets, I left on Monday to embark on a road trip from the Northwest part of the U.S. to the Southwest.  A map of my route is shown below, a total of 1142 miles (1838 km) and estimated to be between 16-19 hours total.  I opted to limit my daily drives to about 4-6 hours, so I planned overnight stops in the following places: Walla Walla, WA; Caldwell, ID; Salt Lake City, UT; and Bryce Canyon, UT.  And today I drove to Kanab, my destination, which is about an hour south of Bryce Canyon.  I’ve been pleasantly surprised how beautiful Utah is, from the snow-capped mountains in the north to the red rock canyons of the south, it’s been great to see so many new things, since I haven’t been to this part of the U.S. prior to now.

So why Kanab, Utah, of all places?  A small town near the southern border of Utah with a population of less than 5000 people?  What in the world could possibly be there that I would drive all that way to spend a minimum of five weeks?  Thanks for asking!  It happens to be the location of the largest no-kill animal sanctuary for domestic pets in the United States, on a huge expanse of land, set in the red rock canyons of the Southwest.  And volunteers and interns from all over the world go to spend time there, so it was the perfect choice for my next adventure!  What is this magical place, you ask?  It’s called Best Friends, and their web site is a treasure trove of information about everything you could possibly want to know about the place, their mission, how they got started, the work that they do, the animals that are cared for there, how to volunteer, as well as information about their other locations and partner organizations.  Check it out!

I will be in their five week animal care internship program, starting on Monday, April 2 and going through Friday, May 5.  During the five weeks, I’ll spend one week in each of their five main animal care areas: Dogtown, Catworld, Parrot Garden, Bunny House, and Horse Haven combined with Marshall’s Piggy Paradise.  There are four other interns in my session, and so we rotate each of those five areas.  I have my schedule for my first week and I’ll be spending four of those days with birds in the Parrot Garden, as well as one day in their Wild Friends area, which is where they care for other wildlife, such as birds of prey, reptiles, or small mammals that need to be nursed back to health.  I’m staying off-site, as that was the more cost effective option for a longer stay, so I’ll have a 10-15 minute drive to and from the sanctuary each week day while I’m there.  I plan to explore the surrounding area on my weekends off, such as day trips to Zion National Park and the north rim of the Grand Canyon.

Ok, so that’s the larger plan, but let’s just spend a few moments on my first national park visit in Utah, Bryce Canyon National Park!  Because it’s a stunner, people.  I can’t say that it’s more or less amazing than other national parks that I’ve visited — it’s just so unique, which is its claim to fame in the world of U.S. National Parks.  I had always imagined that a visit to this park would be in warm weather, but I’m glad that I visited in the early spring, because it has a certain beauty in the snow that I’d otherwise miss.  Part of that is the altitude, which varies between 8000-9000 feet (~2400-2700 meters) around the rim of the canyons, for example, which is where I visited.  And I felt it — I’m used to sea level, so being up this high is no joke on the body.  Kanab is about 5000 feet (~1500 meters), so that won’t be quite as bad, but it’s still much different for us sea level kids.

Thursday afternoon I visited just the northern part of the park (the four Bryce Ampitheater points: Sunrise, Sunset, Inspiration, and Bryce), and then Friday I covered the whole thing, visiting all of the lookout areas, with a few photos taken at the Ampitheater points again, but then I headed all the way to the southern most spot at Rainbow Point and Yovimpa Point, then north from there.  I was blessed with some weather clearing midday that resulted in some amazing images.  I made a third visit on Saturday morning, through the driving snow and hail, waiting it out until the skies opened up and I got the best images thus far.  Below is the park map, for reference, followed by my photos.

And here’s a sample of photos from my three days in Bryce Canyon National Park! 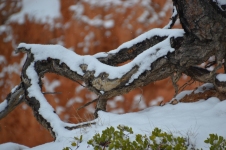 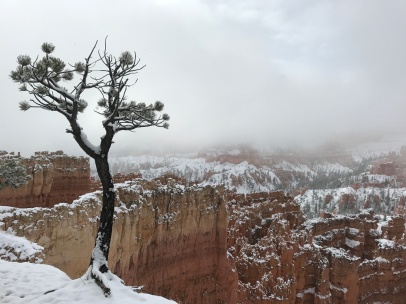 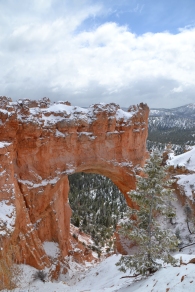 Loved this little tree atop one of the rock formations

The red columns rising out of the snow

Snowy tree against the sky

Detail of erosion in action

Partway down into the ampitheater of stone 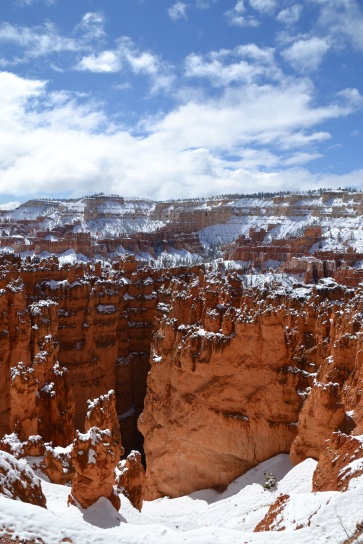 Snow melting off the branches

Viewpoints and trails down into the canyon

Pro Tip: Before I left Seattle, I bought an annual park pass ($80 per vehicle) since I plan to visit at least three national parks on this trip, so the pass was a smart choice versus paying the single day entry fee at each park.  For instance, I’ve gone into Bryce Canyon NP the last two days, so that would have been $60 right there, since their day rate is $30.  Since I had a $30 dividend to spend at REI where they just happen to sell the passes, I just had to pay the $50 difference, so this thing has already paid for itself in two days.  BOOM.