Five weeks went by so quickly, and I was glad that I decided to stay for longer, as it allowed me to just enjoy every day of my final week, knowing that I would be able to visit all the animal areas again, just in a different capacity as a volunteer.  My last week of the internship was with all the horses, pigs, and goats.  And of course also with a cat that has taken up residence in the area as the unofficial mascot of this part of the sanctuary, ironically named Meow, as I never heard her make a peep.  I had heard from many people during my previous four weeks that this area was a favorite, and that they were most surprised by how much they enjoyed spending time with the pigs.  So I was pleased to start my week with a couple days with the pot-bellied group, and what a fun time it turned out to be!

Perhaps the pigs were such a surprise to so many people since we tend to have more experience around other animals, such as dogs, cats, horses, etc.  I like to think it’s because of their charming personalities, intelligence, and social dynamics, and I would bet that is what the caregivers would say, as well.  It was interesting to learn about them, especially their social behaviors, as it’s really not that different to other animals that live in groups.  I found myself thinking of the lions, with their social interactions, as there are definite similarities, save for some obvious differences, such as prey versus predator behaviors, of course.  There are nearly two dozen pigs at the sanctuary, most of them the pot-bellied version, and one that is a mix of wild boar.  Of course.  For those familiar with the writing of Martha Beck, you’ll get why having a boar cross my path at this time in my life is particularly apropos.

The pigs are just adorable.  Honestly.  So expressive.  They make the cutest little sounds when they want attention, or are happy, often rolling on their sides for belly rubs and scratches, happily grunting away.  Meal time is a festival of jubilation, and just one time that you can see social hierachy in action.  They get a combination of vegetables and greens, and are experts at getting every last little bit of it.  And contrary to cliche, pigs like a neat environment.  Similar to elephants and other animals, they will take mud baths to protect their skin and provide relief from insects, but they are actually quite fastidious.  And if you haven’t ever brushed a pig, similar to how you’d brush a horse, you’re missing out.  The little grunts of happiness are golden.  And then there is walking with pigs, because that is also just a hoot. 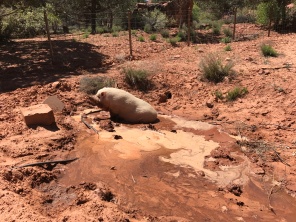 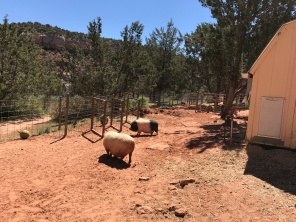 Ella was a favorite, with her Oreo cookie stripe

Scout in his bachelor pad

Little Paisley, in all her cuteness, about five months old

With Pickles, who loves attention 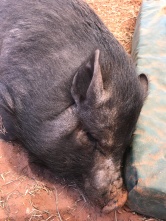 Pickles having a little nap next to one of her pools 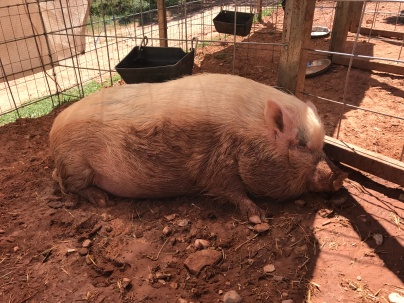 Jasmine having a nap after her mud bath 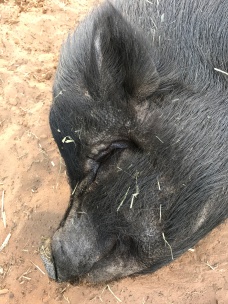 Roxy having a nap after some tummy rubs 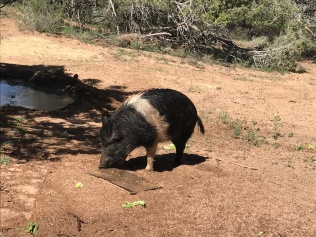 Holly having her veggies

Riley and Miley snuggled up together 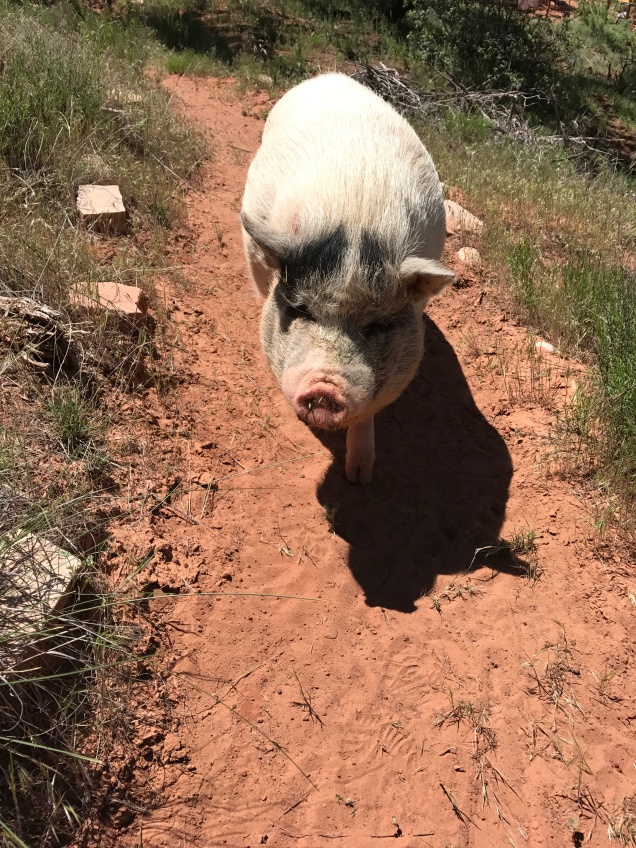 Miss Molly on a walk

On Wednesday, it was a day with the goats, and similar to the pigs, it was fun to see their unique personalities and behaviors.  As with all the animal areas, feeding and cleaning is a daily chore, and an important part of ensuring that the animals have a good environment.  The goats are such curious and interesting animals.  There were a couple that were fairily new to the sanctuary, and therefore a bit more aloof around people, with the rest being quite social and inquisitive about their human caregivers and visitors, whether interns, volunteers, or people on a tour of the sanctuary.  Once we were done cleaning, we got out the brushes, and good gravy, there were a few that just love to be brushed.  One of them that followed me around like a shadow was a beauty named Sunshine.  This girl was all about getting brushed, and she decided that I was pretty cool beans for obliging her.  Two of the most friendly were adopted and soon going to their new home, a story that never gets old — whether it be for a dog, cat, or goat, getting a good home is always the best possible outcome for them. 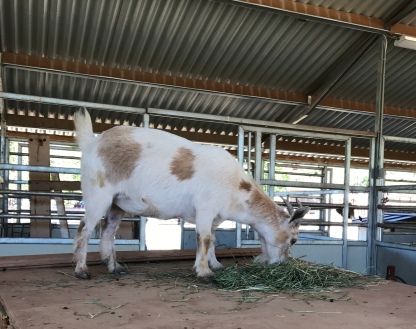 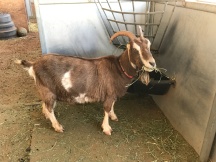 The last two days were with the horses, which was another great experience.  About half of the horses at the sanctuary are on special diets due to a variety of factors, so part of the day is making their special buckets of food with additional hydration to make it easier for them to eat and digest.  Just another example of the type of specialized care that is given to each animal here, ensuring that their unique dietary needs are met.  I also attended a Parelli Natural Horsemanship demonstration, which is an approach to horsemanship that takes the personalities of horses into account, similar to the concept of Myers Briggs for humans.  It basically helps classify a horse as either introvert or extrovert, and left-brained or right-brained, as a way to help with the relation to them as unique, rather than treating them all the same.  Fascinating stuff.  To see someone trained in this method use fingertip pressure only, and mostly the energy of intention, to guide a horse in a variety of ways, it’s quite impressive.  And, you realize, if you’re tuned into the core of it, quite intuitive.  I haven’t spent a lot of time with horses in my life, so I certainly don’t have experience with other more forceful approaches, so it was good to be with them in this setting, and with this approach.  A bit of an unknown secret about me is that I have a slight fear of horses — not the whole animal, to be clear — specifically the jaw/mouth, and it’s the idea of accidentally losing a finger while hand-feeding them.  I know… it sounds bizarre, especially considering that I’ve been right up close with lions, afterall.  But I was able to work on that a bit, and thankfully since it’s only a minor fear, it wasn’t a factor during my time with them.

Based on name alone, before I knew which horse it was, I decided that my favorite was River.  I met him at the end of the day, and it turned out that he was the stunning light gray horse that I had seen each day, as his pasture is right near the main buildings.  He is a gentle horse, and while originally classified as a mild left-brain extrovert, he seemed more introverted to me, and it sounds like the social dynamics with his other pasture mates has shifted a bit with time.  I was also quite taken with Jewel, a striking horse with a fiesty spirit, a classic right-brain extrovert and she knows it.  And Titan, another beauty, who is another striking light grey male like River, he’s in the upper left below, and the other two photos are of me with River.

Titan, with his mane and tail stained red from the red soil 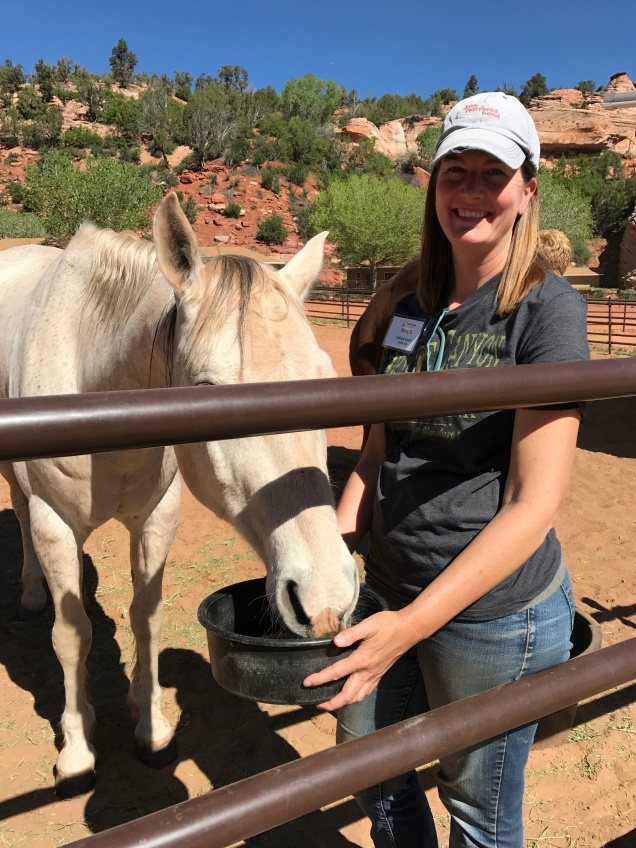 All during the week the adorable cat, Meow, was around to get some attention, find shady spots to enjoy the day, and just generally make it that much more awesome, along with all the staff members’ dogs that come in each day, spending time on the porch of the main building, or going along in the truck for the horse feed rounds.  Sort of made it all feel a bit like ranch life for a week, and a place that I look forward to visiting again.

Looking toward the horse pastures from the Welcome Center

The pastures away the promise of sunrise

View of the lower canyon and pastures from the cafe deck

I started the following week by volunteering in the dog area of the sanctuary, and then made a midweek trip to Zion National Park for a couple days, so once I get all my photos sorted, I’ll do a write-up on my time exploring that park.  Whee!