This was my first Christmas away from home, spending it with my international volunteer family, and it was a great time.  It was fun to be in a place south of the equator, where the seasons are flipped from what I’m used to, and rather than having a cold holiday, it was quite hot.  And it’s the first holiday that I’ve spent with lions, so that made it extra special.

Over the last week or so, I’ve spent time on the lion project, as well as both the community and research projects, and the variety continues to weave in different aspects of the land, wildlife, and people, making the overall experience that much richer.  Most of us probably haven’t seen poverty like that which can be witnessed here, and yet while some people may be very poor in terms of financial measure, they have very rich lives filled with love, joy, family, friends, and community.  There is an infectious happiness in the Zimbabwe people, and I’ve enjoyed my time with them so much.

The lions continue to be ever-so entertaining and interesting, whether we’re just watching them play and enjoy their environment, or specific occasions.  Like one day, Pendo found the rubber sole of a shoe out in the bush and carried it so proudly all the way back to her enclosure; or the times that we’ve taken a ball for them to play with (the only man-made “toy” allowed); or today when she found and killed a monitor lizard that had gotten into the water trough, and then her brother took it away from her.  Phezulu (pronouned “Pah-zoo-loo”) is like a very big baby cub still, loving affection, and he’s happy to get plenty of pats and belly rubs from everyone.  Pendo, on the other hand, is a real pistol.  Some people find it cute that she’s so assertive, like stalking and charging, but I see it only as a sign of a healthy lion just being a lion, and one that is definitely ready for the next stage of this program.

And that leads me to perhaps the toughest part of being here as a volunteer and learning about all of the complex and interwoven aspects of this multi-stage program of these amazing animals: the challenges, of which there are many, but a few key ones are worth noting.  First and most difficult for me to deal with is the suspension of animal transfer permits due to illegal poaching and hunting, such as what happened with Cecil the lion.  That incident wasn’t just the death of one lion.  Nor was it just the death of all of his future offspring.  Illegal  also was a major contributor to the suspension of animals transfers, which means that there are four lions here in Victoria Falls alone, all of whom are at the age to have been transferred to the next stage of the program, and all of which are in limbo.  This is true of lions in some of the other locations, as well.  Other contributors to the equation are the search for suitable land for the lions, since loss of natural habitat due to human population growth is quite substantial; coordination and cooperation with all of the various agencies and organizations that deal with wildnerness and wildlife management; the huge financial investment needed to care for the animals, from proper wildlife grade fencing, to live game animals in the environment, to veterinary care; and administrative costs for the entire company.

It’s hard not to let these challenges overshadow the successes, and to wind up feeling a bit overwhelmed by these obstacles, but spending time with the lions nearly every day, seeing how healthy and well-cared-for they are, seeing the dedication of everyone involed in this organization, and being filled with hope and anticipation for their future… well, that is the point, really.  It is what I hoped I would find in coming here, and what I’m happy to be a part of, however small my contributions may be.  Each of the four lions here has looked me straight in the eyes, each with their own personalities and demeanor, and it’s really quite something.  It’s a heart-stirring silent interaction, and one that I’ll never forget.

This is my last week in Victoria Falls, and I’m filling it with all the remaining adventures that I wanted to do, such as a helicopter ride over the falls, and later this week, some ziplining and bungee swinging over the river gorge.  Then on Sunday it’s an all-day bus ride over to Antelope Park, where they have about 100 lions, and I’m giddy with anticipation, while sad to leave Vic Falls.  My true hope, however slim a chance I think it is, is that Phezulu, Pendo, Fumi, and Vithi are all able to transfer from here to Antelope Park while I’m there.  That would be quite the News Years gift.  Not for me — for them.

Watching a plane — love this, since I do the same thing

She found the sole of a shoe

She carried her prize all the way back

Just look at that face

With a branch “toy” I gave him

With a branch “toy” I gave her 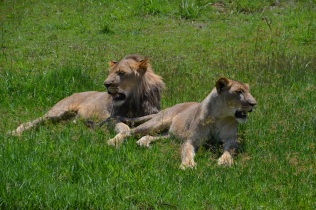 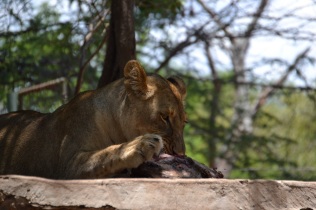 Hiding in the grass

Christmas with the kids 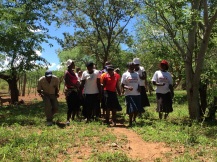 Full moon over the river on Christmas night

Big gash in this one’s leg

Vultures feeding on a carcass

Elephants in the trees

View from the helicopter 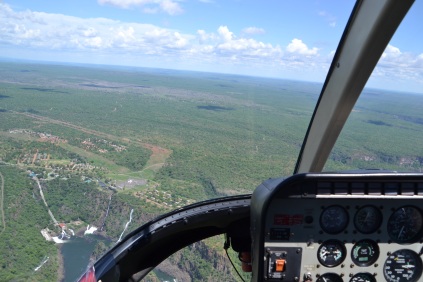 Riding in the co-pilot seat

Vic Falls from the air

Bridge over the river 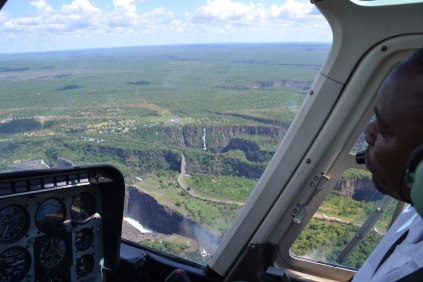 View from the sky

Victoria Falls from above 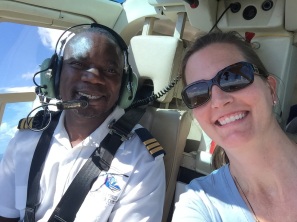 The pilot and I 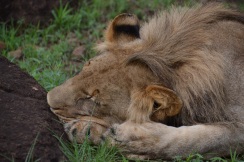 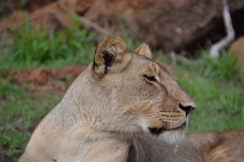 She’s always on the lookout 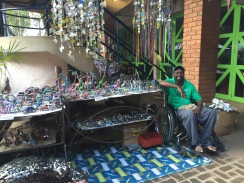 Artist with his work — art out of cans — so cool 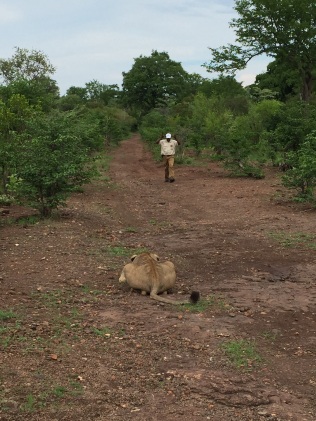 Pendo with a lizard 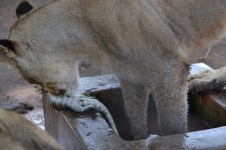 She caught it, he took it

Happy with his capture

4 thoughts on “Christmas in Africa”