We were up early the next day to get an early start on a full day in the park.  It would be my only full day here, so I was glad that we were going to make the most of it by taking packed lunches and staying out all day, even in the heat, which was no joke.  The ideal game drive set-up is to split the day, like we did in the Mara, but given the massive expanse of the Serengeti, having to come back to camp midday would have cut down on how much we were able to see, so it was an easy choice.  Our camp was in the central Serengeti, so it was the perfect location, and that meant the game drive started right outside camp, with the ever-so-photogenic giraffe first up in the morning light.  There was a mother and two young giraffes, perhaps a year apart, the youngest one of which wanted to nurse, but only manage a couple seconds before the mother moved away; all part of the process of transitioning the young to switch to tree leaves and such.  I also spotted a group of elephants, so beautiful in the warm light. 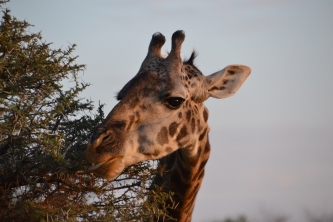 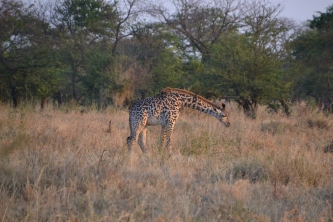 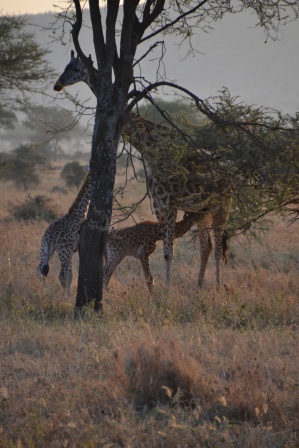 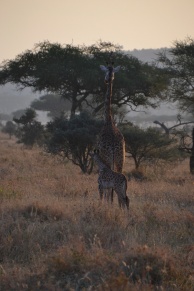 Baby rubbing against its mother 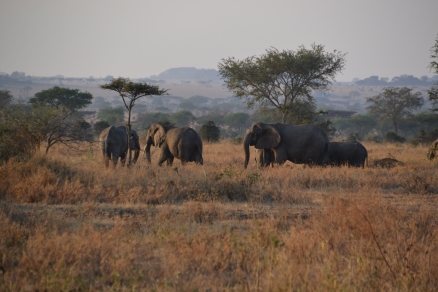 Elephants in the morning light

As we came down the hill and turned with a view of the camp, I took a photo of our camp up on the hill in the distance, and then as I turned to my right and looked out the back of the vehicle, that’s when I saw what would become one of my favorite shots of the day, a fantastic sunrise photo.  This is how it often happens, at least for me — I just see it.  The initial subject was out the side of the vehicle, but it turns out the true photo was 90 degrees to my right.  Since I’m always scanning, framing with my eye, I sometimes get lucky. 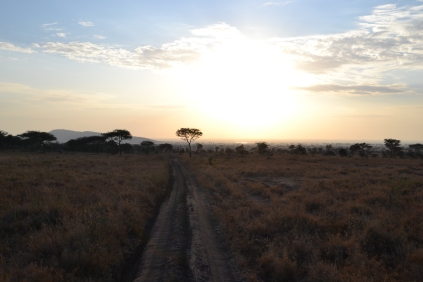 Sunrise over the Serengeti

Our camp on the hill in the distance

I have a t-shirt that I bought in Victoria Falls, white with two zebras on it, and silver writing over them, with the following, which is perfect for mornings like this:

Dawn in Africa — when golden rays of sun creep silently
across the land, dew is caught like diamonds
suspended in the long grass.
Birds call in the pale cool light before the heat, before the
drone of insects, before the stamp of hooves, before the brute
force of the hunter and the shrill alarm of the hunted
reaches a crescendo.
Dawn in Africa — when nature in its myriad forms
bursts into life from the deep fertile soils and spreads
across the land reaching for the heat of the sun, chasing
the shadows and the night creatures into the lairs.
An ancient cycle — relentless — unforgettable.

Our first thrill of the day was coming across a pride of eleven lions that presented themselves one-by-one through the trees and into the golden grassy plain on the way to a tree-lined river bed to drink.  They were all very healthy and large, so my guess is that they had just finished a kill from the night before.  We would soon confirm this.  The first female to appear was a little ways away, and then next appeared through the trees and stood for a moment in what would become one of my other favorite photos of the day.  I had two winners and it wasn’t even 9:00 a.m. yet.  This is the Serengeti.  Just magical.  Then the lions just kept coming through the trees, several of them chasing each other, the last of which lagged quite a bit behind, a juvenile male.  They were all so beautiful.  This is how it should be — living free. 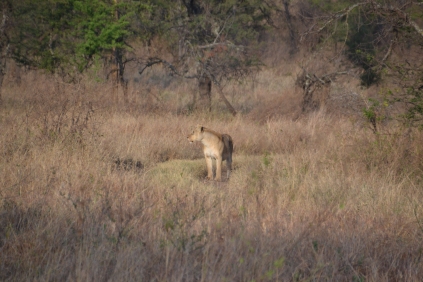 Five of the eleven pride members

One of the young ones, still with spots

Start of the chase 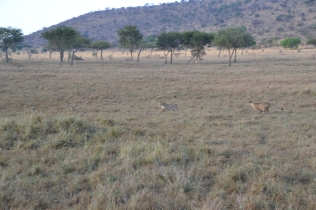 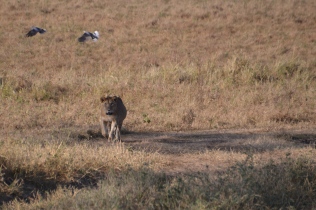 Loved his gaze, but the birds weren’t as thrilled

Back up into the trees and to an area from where the lions had come, we came across a large hyena clan, chomping away at the remains of what we suspect was the lion kill, a good size buffalo carcass.  When the vehicle engines were shut off, and we sat in silence, you could hear the crushing of bone as the hyena devoured the remains, with various scavenger birds all around in the trees, waiting for their turn.  I didn’t much care for hyena before coming to Africa, not knowing much about them and seeing them just as adversaries of the lion, but I’ve come to appreciate them quite a bit.  They’re ridiculously smart, can be sort of ugly cute, and they are one of the animal groups where the females rule supreme, so gotta love that. 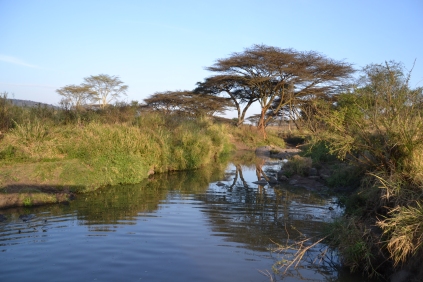 Preening while waiting for the hyena to finish eating

Hyena chomping on leftovers from a lion feed

One of the family members

This one had beautiful markings

We ventured into another part of the park, seeing various wildlife along the way, including a group of four lions sunning themselves on the gentle slope of the open plains.  We ventured to an outlook area, walking up to the top of a massive rock, with views over the land, with the most colorful birds and an entertaining little lizard.  A second stop a while later at a similar spot was with the famous gong rocks that make a large bell like sound when struck with smaller rocks.  It was quite cool.  I appreciated these moments to get out of the vehicle and look over the massive stretch of land all around, being still to just let nature’s song sing to us.  My tour companions and guides continued to offer to take photos of me, since most people want this, but I honestly don’t really like to be in the photos.  I’d rather be behind the lens, letting the natural world be the subject, since nothing can top its beauty.  So a couple obligatory photos of me as proof that I was there (uh, proof is all the photos I took of the place itself), and then we were off again to go explore. 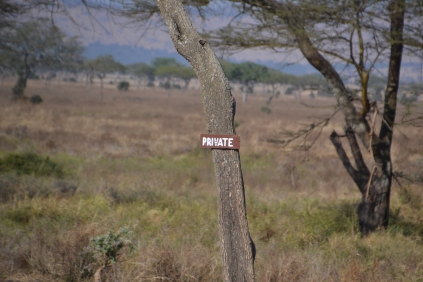 Resting in the sun

Young males in the distance

This little cutie is a hyrax

Our guides — they were great fun 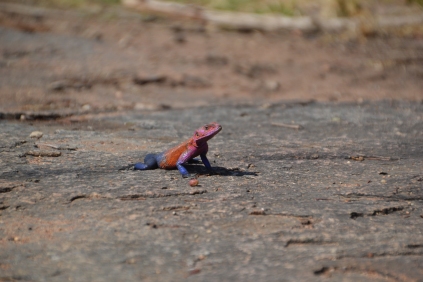 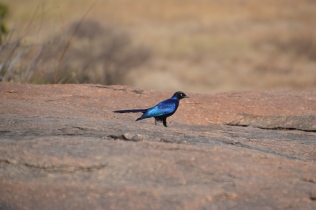 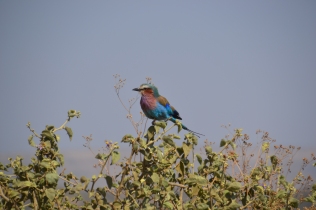 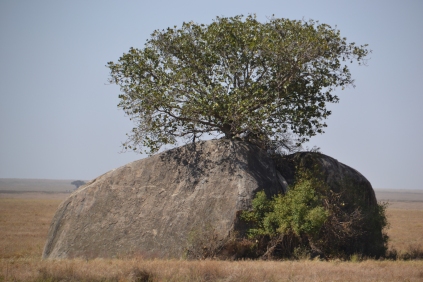 Tree out of a rock

Old remains of a tree 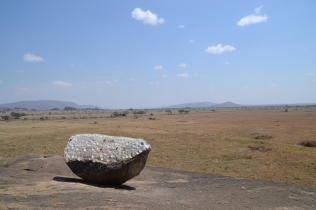 Gong rock that makes a bell like sound when struck 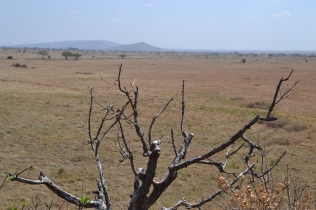 Someone insisted on photos of me…

… and so here they are

In between these two stops, it happened.  Way off in the distance, on a huge rock, several cheetahs sunning themselves and surveying the land.  Even with full zoom of my camera, they were quite small, so I spent a couple minutes with the binoculars for a closer view, at least until my eyes teared up and I had to just put them down and process the moment.  Cheetahs in the Serengeti.  It was at the very the top of my list, and here it was.  The only thing that would top my cheetah sightings thus far was seeing a chase, and as if they heard my silent wish, they began to venture off the rock to a second higher viewpoint, so I was hopeful that it would develop into something.  I got another photo of two of them on a high rock, again from way far away, but in a way it’s cool to get that perspective.  It wasn’t too much longer before I got my wish, and one of them started a chase of some gazelles.  It’s incredible to see the progression of the initial run develop into a full sprint, their bodies flying over the ground as if jet-propelled — the speed is unreal.  The gazelle proved to be too fast and nimble for the cheetah this time, but it was still thrilling.  Once we were a bit closer, I determined that this looked to be a mother and two sub-adult cubs with a bit of fuzz still on the back of their necks, but they were nearly full size. 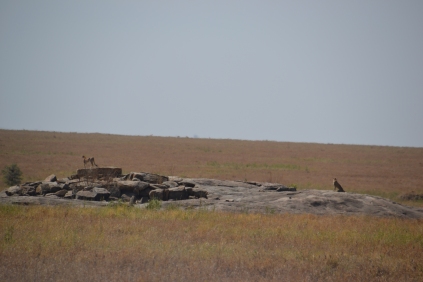 Start of the run after some gazelles 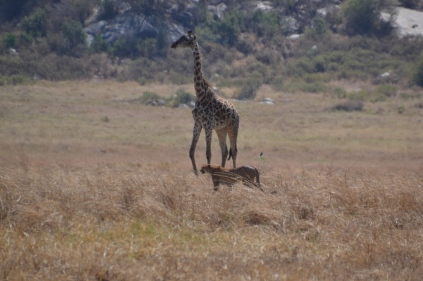 Just another day on the plains 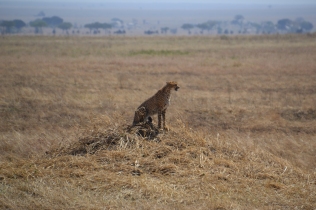 Having another look around 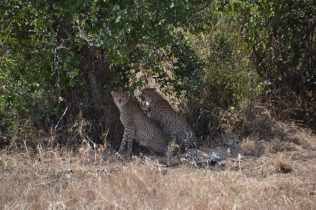 Resting in the shade after the chase

The rest of the afternoon game drive include a wide variety of animal sightings, from elephants, giraffes, hippos, baboons, a bunch of birds, and even a pair of Kirk’s dikdiks, the smallest of the antelope family of animals.  We had lunch at a picnic spot, along with a bunch of other safari vehicles, and it was quite nice to enjoy the view.  One highlight of the afternoon was finding a small pride of lions all huddled together in the shade of a tree, including a cub that was less than a year old, trying to escape the day’s incredible heat.  Thinking that the day just couldn’t get better, it ended with another leopard sighting, in a tree of course, but this time with the head turned toward us, so I got a couple shots, again with full zoom, where you can just make out the spotty head.  Given the rarity of leopard sightings, I felt quite fortunate to have not just one, but two. 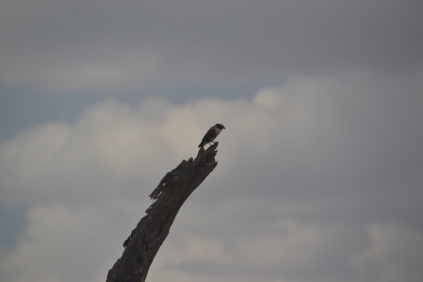 Lion pride huddled under the shade of a tree 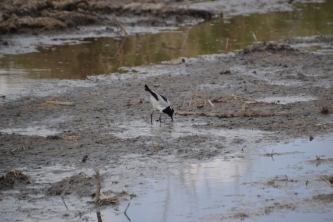 Bird feeding in the river bed 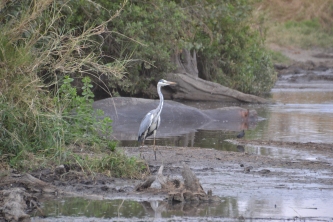 Heron sharing the river with hippos 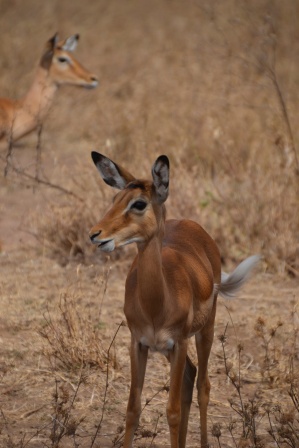 Elephants on the golden horizon

Leopard in a tree

Leopard thought this tree was beautiful, too

Waking up from its nap

We returned to camp, and I spent time in the lounge area enjoying the view while uploading photos, chatting with a fellow traveler, a lovely evening at the end of another incredible day.  One of the greatest things about travel is the people you meet, and I’ve been blessed during my time here to come to know some wonderful people, from Zimbabwe to Zambia, Kenya, and now Tanzania, and what I can say is true all across this continent is that there is an unwavering joyous spirit in the people everywhere I’ve gone.  It’s made the trip that much more special.

After another restful night in the middle of the Serengeti, we had an early breakfast during sunrise, and then were off into the morning light to enjoy the rest of the journey on our way to Ngorongoro. 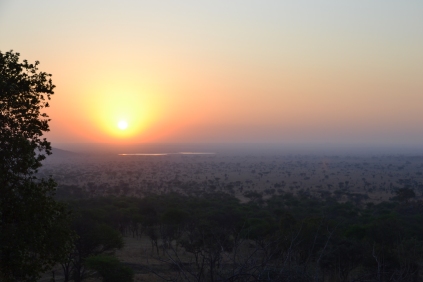 Final sunrise over the Serengeti

Breakfast with a view 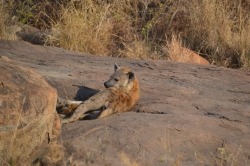 Hyena warming in the morning sun 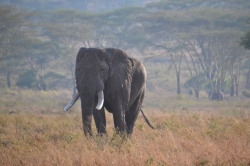 Magnificent tusks on this bull 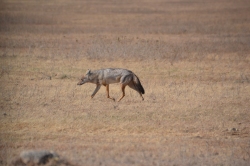 Silver backed jackal on the hunt 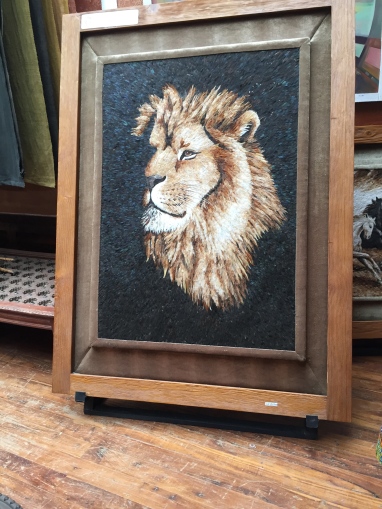 Next up: Ngorongoro Crater!

One thought on “Tanzania: The Serengeti — Day Two”